During the first weekend of November I ran my first workshop ever, in Snowdonia. It rained. It rained a lot. In fact I’m pretty sure I saw Noah floating down the A5. But, with bad weather comes opportunity.

Along for the ride was Lee Acaster as a special guest. There to shoot his own images but also to help out with the other participants. Given the conditions I was most certainly glad he was there. I’ve got to know Lee gradually over the last year on Twitter. I first came across him when taking part in the weekly WexMondays competition, which he subsequently won overall in 2014. He was also the British Wildlife Photographer of the Year as a result of his Greylag Goose shot. On top of that he’s won numerous online competitions on Photocrowd and Viewbug as wells as having images commended in various national and international competitions such as Landscape Photographer of the Year and Outdoor Photographer of the Year. I’m sure his next major competition win is just around the corner. Previously we collaborated in August at the Light & Land Mall Galleries exhibition in London, sharing a space and exhibiting some of our best known work. He is however, unfamiliar with Snowdonia, unlike myself, I’ve been hiking there for many years.

The format of the workshop was two single days shooting from just before sunrise on each day until roughly midday. Participants then had an entirely voluntary choice to join me for a hike into the hills for a later afternoon/sunset shoot somewhere more ‘airy’. In the mornings all of my focus was on them, I wasn’t intending to photograph any locations, but the afternoon was very much intended to be a mission from which I could take away an image or two too. One of the things I’ve heard a lot from others (and indeed one of the reasons one of my clients signed up) is that people are tired of paying money to go on a workshop only for the ‘leader’ to charge ahead, get the shot before everyone, and then announce they were moving on before anyone had done any meaningful photography. This was something I was determined to avoid.

The previous week the weather had for the most part been sublime. High pressure was in charge and autumn colours dominated the landscape. Mist and flat calm lakes were commonplace. I saw several people leading workshops in Snowdonia that that were blessed with ideal conditions. I didn’t get those conditions, that would be too easy. No, the Jet Stream decided to fall south and sit over the UK starting on the Friday, bringing with it wind and driving rain. Rain that I don’t think has stopped falling since we returned. Because of this dire forecast, plans had to change. Lee and I arrived in Capel Curig early Friday evening and headed to the pub to rendezvous with my clients who were joining us for the Saturday. We had a beer and some food and got to know each other and I was confident we’d have a decent start on Saturday morning. There were several weather windows forecast and as I fell asleep in my rather comfy bed on the Friday night, Plan B was in effect…we won’t talk about Plan A, that was wildly optimistic and had been discarded days before. It was supposed to be dry and possibly a little clear for sunrise until at least 9am. Then some light showers before clearing late afternoon.

Waking to a 5:30am alarm and to the sound of a howling gale and heavy rain wasn’t the plan! Erm, let’s go with Plan C…no, err Plan D, oh sod it, activate the doomsday device!

Meeting the clients in the pitch black of a thoroughly miserable and wet café car park at 6am I decided that our best chance of anything remotely photography related rested on getting away from the mountains, which in some way was counter-intuitive to the purpose of the workshop. Hopefully it would only be for a few hours and then we could head back towards the tall rocky stuff. Anglesey was our new destination, to a particularly good area for woodland treescapes and next to the beach for some moody seascape action. Not my cup of tea for sure, but not something I am unfamiliar with either and with Lee in tow who has made a name for himself in such environments I was pretty confident we could work this to our advantage. Arriving as dawn broke we quickly gathered our things and headed for the beach. Miraculously only 5 minutes later we happened upon an interesting half buried log and set about taking some photos of it in the gale and the rain. Not an easy task, but as Lee pointed out, the colour of the raging (ish) sea was fantastic despite the fret. After imparting advice on the relative merits of different focal lens to capture such a scene, the wind picked up and another squall came in which was a sign to head for the trees for some cover, or lack of it it turns out. Despite this we hunted around in the rain for pleasing compositions, not necessarily to take advantage of that day, but maybe when the weather was being a little less cruel. Time was getting on and we needed some breakfast.

Driving back towards Snowdonia we could finally see the mountains that had been obscured by the fret and the cloud was lifting rapidly. We were a little too far away and breakfast was going to have to wait and be brunch instead. In order to take advantage of conditions you need to adapt and given the worsening forecast for the weekend it looked like if we were presented with good conditions, we really had to take advantage of them. As we were a little of out place with most of the locations I had in mind for the workshop and the capabilities of the group, I chose a back-up option, much like the beach location earlier had been a ‘back-up’. We made a beeline for some slate quarries. That was a great decision. Ok, as we arrived the sun came out and basically ruined any wider shots we might have hoped for, but it didn’t last long before the Sun disappeared again. We spent some time exploring the site and focussing on much of the dereliction around us. It’s certainly a place I need to return to and give a lot more time I think, although I did manage to shoot a couple of frames whilst folks were exploring. 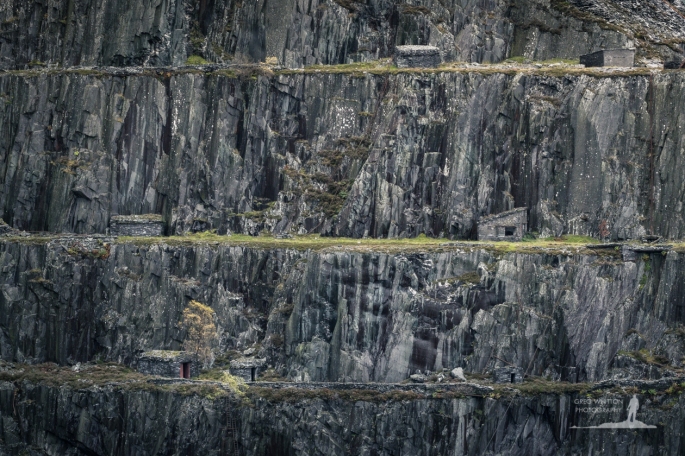 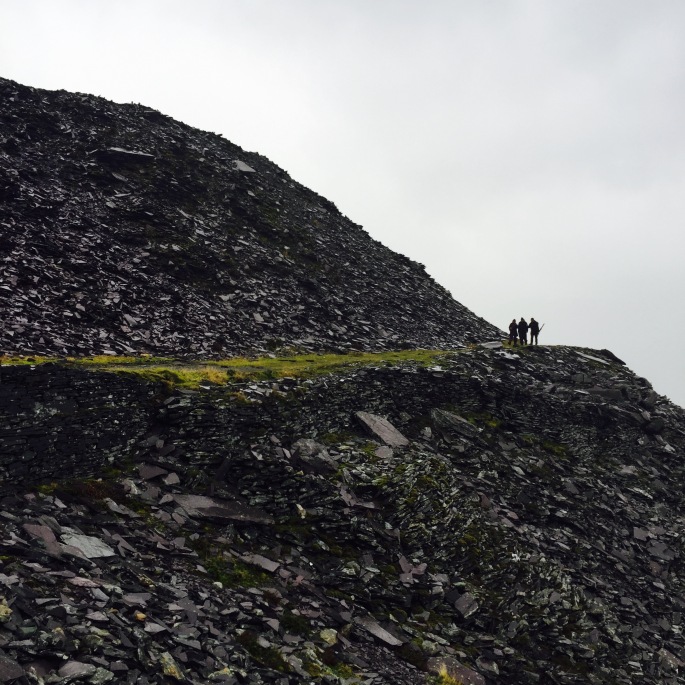 Some of the group returning to the car (iPhone)…

Brunch, and a lovely one it was too. I really can’t recommend the Moel Siabod cafe in Capel Curig enough. Good food, free wifi, friendly service, free parking and to top it all off, a photo gallery, exhibiting local photographers work. One such photographer being Nick Livesey, who just also happened to serve us our brunch. Nick is a lovely guy who I’ve gradually started to get to know more over recent months, so much so he intended to join us for dinner and a pint later that evening.

After brunch it looked like there was potential as the storms subsided for a gap out west that might give us a fabulous display of light at sunset. Those who were able joined me to hike up one of the western hills in search of some light. The ascent was steep and in the end some decided to wait it out on the lower slopes. One of my clients and I pressed on a bit as glorious sunlight came streaming down the valley, until as our hard luck would have it, a heavy cloud rolled over the summit to extinguish any hope of glorious fading light. Next time maybe.

The light streaming down the valley (Fuji X-T1)…

Some interesting light around Snowdon and Yr Aran (Fuji X-T1)…

Sunday, and there was a chance of a decent sunrise. Another early start and an easy hike to Llyn Llydaw which lies beneath Snowdon. The Sun was due to rise just to the south of of the peak of Moel Siabod with sunlight striking the impressive eastern face of Snowdon and Crib Goch. The skies were clear and high cloud turned pink as we walked the Miners track arriving at out destination about 20 minutes before sunrise. We might get lucky! Checking that each of my clients were prepared and had found interesting compositions all we could do was wait…and just minutes before the sun rose over the horizon, the storm front that had been threatening rolled over the Snowdon Massiff enough to blot out any hope of light. Along with it came the rain. Retreat.

The rain lashed down and we headed off for breakfast. A check of the weather showed things weren’t going to improve although there was a little respite back in Capel Curig. To take advantage we spent a good hour in glorious woodland close by which was an opportunity for some tuition and advice away from driving rain. It was great to be able to watch Lee and his rapid and efficient approach to photography, something that is essential sometimes given the conditions and something I repeated to my clients over the course of the weekend.

The rain started again and given how miserable it was and the fact that no meaningful photography was likely to take place in those conditions, I decided that we’d still head for our late morning destination, Cwm Idwal, but leave our big cameras in the car and head out with just our phones. iPhonography was going to be our task. Far easier on those conditions, to use and keep dry, and no big lens to get splattered constantly with raindrops. We headed as a group into a small canyon and really tried to focus on composition without all the gubbins. 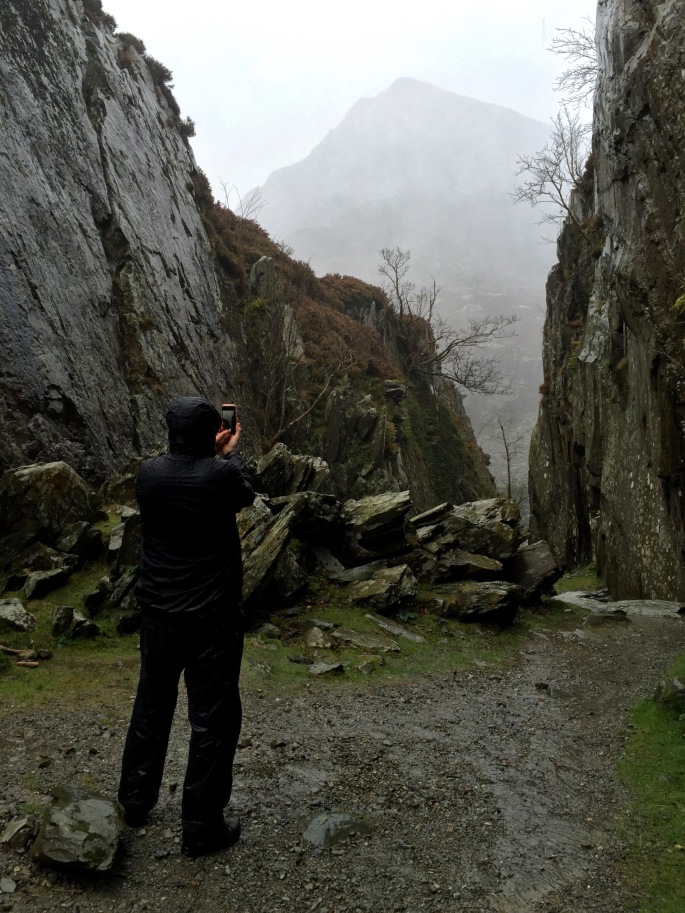 Barry taking a shot with his iPhone (iPhone)…

Heading up to Cwm Idwal the conditions were fierce. I’ve been out in bad conditions before but this was something else. Strong Gales and incredible gusts of wind and rain lashing your face such that you couldn’t look up. But, it was fun once you accepted you had no chance of keeping dry. It was definitely the right choice to leave the cameras in the car.

All in all a great weekend. The weather was not on our side at all, but this was a great learning experience and it was thoroughly enjoyable helping folks out, improving what we could and helping them to see things differently sometimes. Thanks to Lee for helping out, hopefully I haven’t put him off!

Some feedback from the folks who were brave enough to venture out with me:

“Excellent pre planning and communication prior to the Workshop, explaining exactly what to take was really helpful, Greg is very patient and considerate and on hand to offer advice, he even made us coffee in a pine forest! I would definitely recommend, you will be well looked after. – Sarah”

“Great knowledge of the area, allowing access to sites we might not have otherwise seen.  Also provided the opportunity to get to alternative sites when the weather was less than enjoyable. – Les”

“Excellent weekend which was both informative and good fun, Being out in all conditions has given me the impetus to get off my backside when the weather looks less than perfect and look for the light! – Barry”

If you think you’d like to come on a future workshop with me I’ll be announcing some dates for 2016 soon. To get ahead of the game and onto my mailing list, send me a message via the website

One thought on “A Wild Workshop – Snowdonia Trip Report”